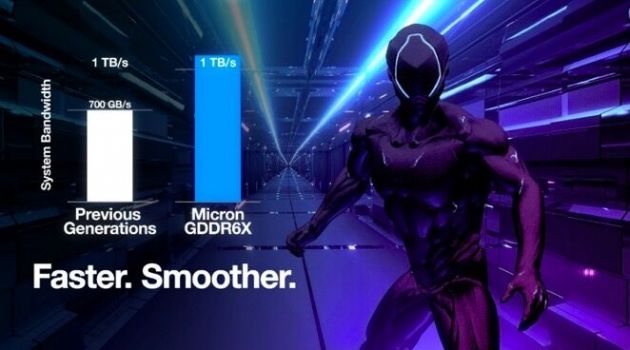 Previously, the video memory bandwidth was up to 64 GB/s. The traditional binary standard relied on two-level signal transmission coded as 1s or 0s data, and one bit of data could be transmitted per cycle. Micron’s new PAM4 technology uses four different levels to simultaneously input and output two bits of data to the memory.

As a result, Micron's GDDR6X significantly increased the memory bandwidth of a single particle to 84 GB/s, thereby increasing the system bandwidth to an unimaginable 1TB/s before.

It is reported that Micron GDDR6X has cooperated with NVIDIA to equip GDDR6X in the new NVIDIA GeForce RTX 3090 and GeForce RTX 3080 GPUs.

In addition, based on the previous collaboration with NVIDIA in GeForce RTX graphics products (equipped with GDDR6), Micron has innovated the memory/GPU interface of GDDR6X and enhanced the performance of complex graphics workloads in next-generation gaming applications.