The memory market environment of 2019 is greatly affected by the decline of DRAM and NAND prices.According to Jim Handy, chief analyst at Objective Analysis, the market is expected to remain flat through 2020, and DRAM is under pressure on margins as it experiences a price collapse.Handy pointed out that prices could fall further."NAND is expected to go up 5 per cent next year, but DRAM will go down 25 per cent, so it's going to be a chaotic year.But when the dust settles, we think the memory market will continue to oversupply in 2020.

The current low cost of storage means that there are few opportunities for new types of storage, because low-cost DRAM and flash memory can meet the demand.Handy said, "the new type of memory still has a long, hard fight to compete with the mainstream."And both DRAM and NAND have plenty of room to grow, according to the memory manufacturers' roadmap, so neither is going out of business anytime soon

Michael Yang, director of IHS Markit, agrees that emerging memory products are unlikely to take off this year."There are still many obstacles to emerging memory," he said.Their challenges include scaling in order to bring costs down to a reasonable price point and thus move into more applications;For the most part, DRAM and flash will continue to make progress on their roadmap.It is to be expected that most vendors have 128 layers of Flash ready to go, but neither Flash nor DRAM will increase production particularly quickly.Historically, the replacement of new storage technologies has not been that radical, especially DRAM.Any new storage technology is a small step forward."

Between emerging storage and existing mature products is 3D Xpoint, whose main products are Intel's Optane SSD and DIMM, which meguiar's developed with Intel but is not pushing hard.Intel has been actively promoting the value of Optane, says Mr Yang, "but I think most people are still on the sidelines."The main hurdle for Optane, he says, is building an ecosystem, and it's not enough just to provide customers with samples to evaluate, but also to include hardware, software, firmware, and support for chipsets, processors, and intended applications."Unfortunately, this is an ecosystem game. 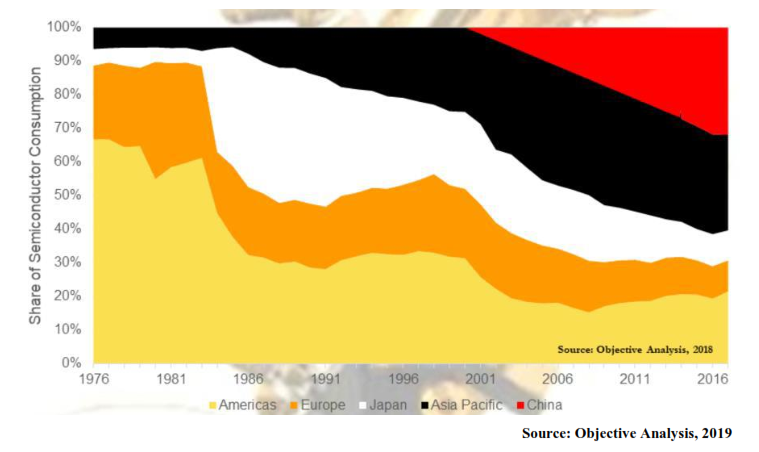 A report released last fall by Objective Analysis estimated that monthly sales of semiconductors in China would look like the chart above if China were removed from the asia-pacific region.However, the emergence of the new coronavirus may affect China's storeroom production plans in the short term

Optane has more potential than other emerging memory and may be ahead in terms of output, but the cost challenge must be addressed, Yang said.Price is an important consideration.Whether the customer buys depends on how much he wants to pay for the performance, "he said."DRAM prices have come down to a very reasonable level, so Optane doesn't have any price advantage right now.

Young says Optane has more potential than other emerging memory and could lead the way in output, but the cost challenges must be addressed.Price is an important consideration.It depends on how much he wants to pay for the show, "he said.The price of DRAM has fallen to a very reasonable level, so Optane now has no price advantage.

Gregory Wong, principal analyst at Forward Insights, believes that 2019 is the first commercial year for Optane, which has its first volume shipment, but he also acknowledges that the DRAM price collapse is a factor in Optane's pricing."We haven't seen similar pricing for 3D XPoint," Wong said, noting that another factor to consider is that meguiar's is shipping 3D XPoint SSDS.So for technologies where expectations are higher than demand, we'll just have to wait and see.

The lower DRAM price may limit the adoption of Intel Optane DIMM, while the lower 3D NAND price may affect the adoption of SSD."When NAND is cheap, you have to have a very compelling use case to support the adoption of expensive equivalents," says Wong.Also, if NAND prices drop to very low levels, customers may overallocate.Customers prefer to be content with the status quo.

As for other emerging memory, Wong believes that ReRAM will not make much of an impact this year as high-density memory, and may serve as a viable low-power alternative in embedded applications.Mr Wong believes MRAM, despite its inherent challenges, will have more opportunities as a standalone component in 2020."It's not a regular type of memory."Today it is less powerful than DRAM but more expensive."Because MRAM is a persistent type of storage, its high price is essentially available to a limited niche market.

The convergence of 5G and 4G is expected to drive demand for solid-state storage and memory in telecoms equipment and data centres.

Not everyone is optimistic about MRAM.Gill Lee, executive director of storage technology in Applied Materials' semiconductor products division, believes that despite the buzz about MRAM's potential, the technology will not make a big breakthrough this year."MRAM is still limited to embedded flash replacement in microcontrollers."He also believes the low prices of DRAM and NAND will limit the popularity of 3D Xpoint, which Intel is trying to drive with its Optane product.

Low prices due to oversupply also tend to mean lower capital spending for manufacturers, but Lee noted that samsung's announcement late last year that it would invest an additional $8 billion in a memory plant in xi 'an, China, raised hopes in the industry.He is more optimistic that 5G deployments will bring more traffic to data centers."Basically, data centers are the main customers for memory chips."(Handy, however, is cautious, though he thinks 5G will be a big deal this year, depending on whether consumers are eager to buy new 5G phones.)

But for mass-produced DRAM and NAND, Lee sees no significant progress from a technical standpoint."Scale cost-effectiveness is the biggest challenge," he said.The speed of any technology replacement will be closely related to the price."If downward pressure on prices persists, switching points will be very challenging.However, once the transition nodes are in place, economies of scale will quickly become apparent, but capital investment will still be required.

Handy said the need for capital investment could lead to some consolidation in the DRAM space as the cost of building a new fab increases too quickly and eats into profits."If there are outsiders coming into the market, it will put more pressure on existing suppliers to consolidate.

These new entrants are likely to come from China.In addition to price pressures and technological advances, the global economic climate and trade relations will also be major factors affecting the memory market, including China's continued efforts to develop its own capabilities to reduce its dependence on foreign suppliers.No matter how much tariffs are raised, we can see China becoming more and more powerful in memory, as trade tensions fuel its ambitions in the memory market, said IHS's Yang."They think it's absolutely necessary;China will undoubtedly become a more powerful player in every market.Maybe not in 2020, but definitely in 2021 and beyond.

However, at the time of my interview, the new coronavirus had not yet been a factor.It is already having a short-term impact on the economy because supply chains can be disrupted at any time.Moreover, Brexit and the ongoing tensions between China and the us will no doubt remain destabilizing factors this year.