According to market research agency data, the revenue of the global foundry industry will increase by 31% in 2021, reaching US$100.2 billion, driving the growth of the entire semiconductor industry...

According to data from market research firm Gartner, the revenue of the global foundry industry will increase by 31% in 2021 to $100.2 billion, driving the growth of the entire semiconductor industry. The agency believes that the growth in foundry sales was mainly due to an 11.5% increase in the average selling price of silicon wafers and an 18% increase in unit shipments.

Gartner's report also shows that the global semiconductor industry's total revenue in 2021 will increase by 26% to $595 billion. Among them, the revenue of foundries in Taiwan and South Korea benefited from strong demand from fabless manufacturers such as AMD and MediaTek.

The capacity utilization rate of the global foundry industry will exceed 95% in 2021, with particularly strong demand for 8-inch wafers for power management ICs, display drivers and fingerprint sensors. Gartner said the shortage of 8-inch wafers could last "for a long time," as fab expansion is limited by a lack of appropriate semiconductor production equipment.

In addition, leading foundries doubled their capex over the next few years to record highs, encouraged by long-term agreements and up-front payments with customers. 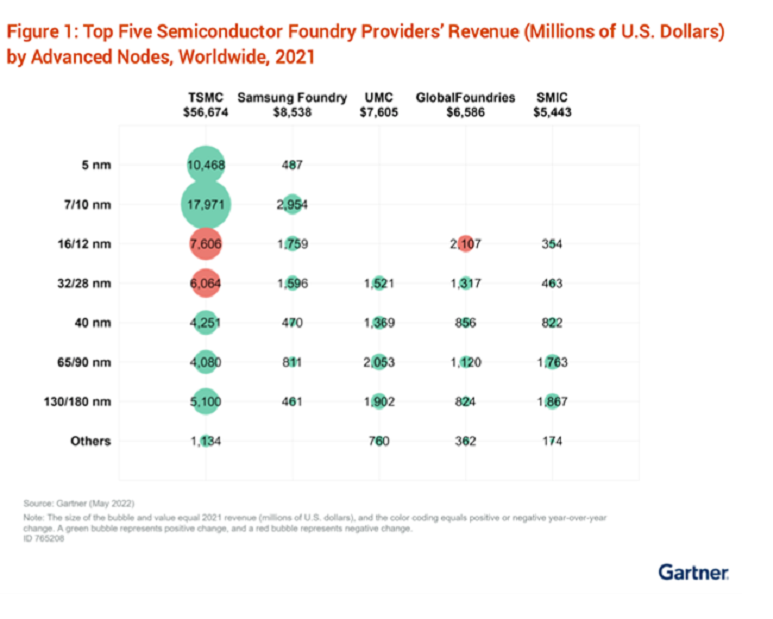 However, TSMC's market share will drop by 3 percentage points to 57% in 2021 as prices are rising more slowly than other rivals. It is worth noting that TSMC has a market share of more than 90% on 7nm and 5nm node chips, and the main customers of these chips are Apple, AMD and MediaTek.

TSMC's latest revenue data shows that the company will produce more than a quarter of the world's logic chips in 2021, mainly application processors, CPUs, GPUs and FPGA chips for customers such as Apple, AMD, MediaTek, Nvidia, Qualcomm and Marvell. product. At the same time, the revenue growth rates of Samsung, NSMC and Huahong Grace in 2021 exceeded that of TSMC, all reaching more than 60% (TSMC's revenue YoY% in 2021 was 24.4%).

Samsung's main customers are Qualcomm, Nvidia and Tesla, the latter three relying on Samsung's 8nm and 14nm chips. Samsung previously took orders for Qualcomm's Snapdragon 888 series, and Nvidia's Ampere and GeForce chips. After TSMC announced a small price increase, Samsung also raised its wafer prices by 20% at the end of 2021, according to a Gartner report.

Third-ranked UMC (UMC) announced that it had achieved "best performance" at its traditional 28nm and more mature process nodes, Gartner said. In 2021, UMC's wafer prices rose 14%. UMC was the first company to develop a 28-nanometer high-voltage process for AMOLED display drivers, which helped the company win an order from Samsung.

The fourth-ranked GlobalFoundries focuses on technologies such as RF-SOI, SiGe and FD-SOI. The company's 12-inch fabs in Malta and Germany focus on FinFETs and FD-SOI, while its relatively older 8-inch fabs in the US and Singapore offer SiGe and BCD technologies. As the global automotive chip shortage was so severe last year, GlobalFoundries has forged key partnerships with customers in the automotive industry such as Ford, BMW and Bosch.

During the U.S.-China trade war, the U.S. government announced that it would cut off the supply of chips to Huawei. Before the chip ban officially took effect, Huawei increased its chip inventory to the level of 6 months. This move has promoted the rapid development of the foundry industry. Separately, the global COVID-19 outbreak has accelerated the shift of mega-tech companies such as Amazon and Google to working from home, prompting them to increase investment in their data center businesses to cope with growing demand for online activities. 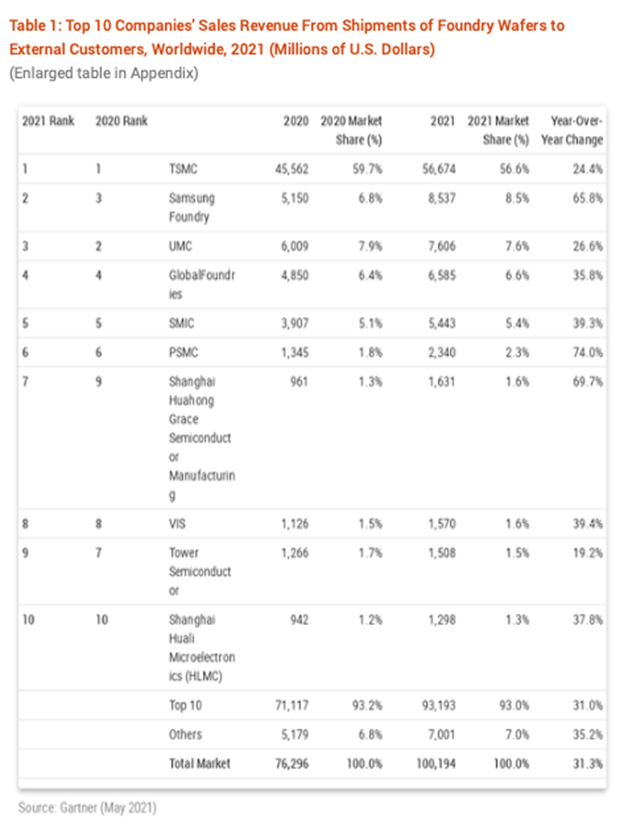 Gartner forecasts for other markets.

Gartner also addressed the issue of chip shortages, which the agency believes will continue to be a concern for the electronics equipment supply chain in 2022, and will impact major electronics equipment markets differently depending on the type of semiconductor component. Shortages of chips for most personal computers and smartphones have eased as production enters the off-season and the supply of semiconductors on the market increases.

Gartner also forecasts the supply situation for the next year in the memory market, the smartphone chip market, and the automotive market. The memory market will remain the largest semiconductor component market during the forecast period and is expected to account for 31.4% of the overall semiconductor market by 2022. DRAM and NAND will be in short supply in the second quarter of 2022; the NAND market is expected to enter an oversupply state in the fourth quarter of 2022. Combined with megabyte shipments and higher average annual ASP, both markets will maintain revenue growth in 2022, with DRAM expected to grow 22.8% and NAND to grow 38.1%.

Smartphone chip revenue will grow 15.2% in 2022, as 5G smartphone production will grow 45.3% in 2022 to 808 million units, accounting for 55% of all smartphone production. Automotive applications will continue to be constrained by component supply through 2023, especially in microcontrollers (MCUs), power management ICs, and voltage regulators.